Don't... close your eyes on the Train

I'd just begun my YTS 2nd. Year (on-site) with a company, and was feeling quite vulnerable, so my mom took me to the train station, so I could catch the train up to Leyland. Now, I had NO 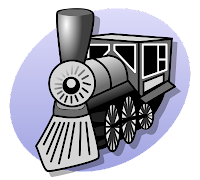 IDEA where Leyland was, other than as I couldn't drive, it was MILES AWAY, and I had to go there for a computer course, obviously I now know ita about 25 minutes away by car, but....

The train came, lots of hugs and tears (anyone would have thought I was going off to war!), and I boarded, with my new breifcase!

The train was FULL of school-kids, now I'd only left school about a year before, but was feeling very 'old' and in need of respect, which I didn;t get, so I had to mooch through carriage after carriage, until I got to the back, and snuggled myself in for the lengthy journey....

Stations came and went, people got on and off almost in a time-warp, I began to get drowsy, and thought, well I'll just close my eyes for 5 minutes... I suddenly awoke at the feeling that all was not well, to find myself stopped, in a covered station, ALONE!

Yep, ALONE... I jumped up in my seat, and shook off the drowsiness, looking around in panic, the scene felt like something out of the 50's Black & White B-movie 'The Day the Earth Stood Still' There wasn't a soul around...

Then, I heard the carriage door open at the end of the corridor, and peaked around the seat in-front of me, to see a conductor walking up the carriage toward me..

"Errmm... Is this Leyland?" I replied

"Nope.... Leyland was back that way about 20 minutes ago, this is Blackpool!"