They call me Sparky for a reason!

(Circa 1996)
To set the tale.... A good few years ago (when I was married the the first time) and the bungalow I lived in had an external Garage which the previous owner had kindly 'wired' up to the Mains, plugged into a normal plug, under a slightly leaking kitchen sink, via a cable running along the top of the adjoining fence!

Well... this cable powered the supply at the far end of the garage, and I decided (or should I say my then wife decided), it would be a good idea to have a garage light, so after careful planning on my behalf, I decided that surely it would be a simple task to put a junction box inside the garage that allows the power at the far end of the garage to continue as permanently live AND have a 'spur' off of it to power 2 internal strip lights (carefully Zip tagged under the pre-fab roof 'leaking' of the garage!

(Noticing a pattern here?)
Now (and I am getting there!) as I've already said, this Live power to the Garage was a 'plug-in' under the sink (YES I SAID SINK) which would occasionally drip onto the cable and 'PUFF' Fuse the house, which was nice! so I came home from work, it was light... (as it was August, I hadn't left my wife just yet, that came at Christmas!) I had my security lamp at the ready and was all geared up.

Now you people out there will have to admit that there has been at least one occasion when you are running on Auto-pilot (for example, you get to work by car an cannot remember certain parts of the journey and usually SHIT yourself when you realise this!) and I was (on that fateful day) in such a mode.... ON AUTO!

I went into the kitchen, opened the under-sink cupboard and simply switched the switch on the power plug leading to the garage OPPOSITE to what it happened to be and thought nothing more of it.....

I grabbed my ladders, walked outside... the birds were a-singing, the evening sun was high and was oblivious to the Peril I was about to put myself in!

Out to the Garage, opened up the up-and-over door, and after 15-20 minutes had attached the Strip light to the ceiling of the Garage (well... it was Zip Tagged for now - but that was the least of my concerns)

"HA" I thought to myself, "Not such an idiot after all!" (My ex-wife seemed to have this illusion that I was thick as shit and she a Genius, although in saying that I did marry her after all?)

I led the wire from the light, through a crack in the roof, fed it through the roof frame and held it next to the area ready for my surgery of inserting a junction box into the existing single power line. I set up my ladders.... UNFORTUNATELY, It had been raining and as the roof did leak here and there, the floor of the Garage was a bit of a lake, so the ladders were IN THE WATER! 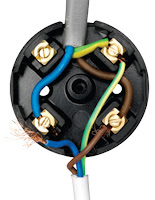 OK.... stripped the end of the cable from the Security light and connected the first wire (EARTH),

"No problem" I thought.. "She'll be well made up when she get's home, I might even get my leg over for this one?"

SO TO SUMMARISE THE SCENE :


As I connected (By Hand!) the LIVE wire from the Security light, to the Junction box 'CLICK'... the Strip Light Flittered a bit, then Came on... now after a brief second of confusion, I was made up! "YES!" I thought to myself "working like a dream! - I'm not as stupid as I thought!"

It was only after another few seconds or two that it dawned on me that I had my finger pressing down the LIVE wire of a LIVE Electric circuit that was powering the security light!

"OH SHIT!"
then
"OH SHIT SHIT SHIT - What the Hell am I going to do?"
Just then..... My neighbour drove down his drive, after what seemed an eternity of me keeping my finger where it was and trying not to breathe (or follow through) he got out of the car smiling and walked towards me...
"Nice Bright Light that Mark!"

"Of course, what do you want?"

< a short time later, the Security light went off >

I hurridly finished the junction box, shut up the garage, went inside and Changed my trousers!